Saw this amazing video of a guy born with great odds...and how he overcomes with an amazing attitude. Even bicycles!!! Watch this and be prepared to be inspired!!

8-29-13: Last Saturday, a group of us took a ride up at Big Bear, Snow Summit. Haven't been up there for the last 16 years, and now that the kids are old enough, we decided to go up there and check it out. We enjoyed the new single-track Skyline trail, went to Grandview Point, and then down Town Trail back to the parking lot. It was 20 degs. cooler and a great ride! Kids enjoyed it and want to do it again. 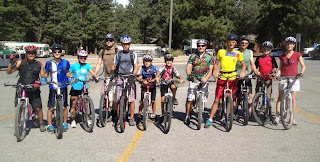 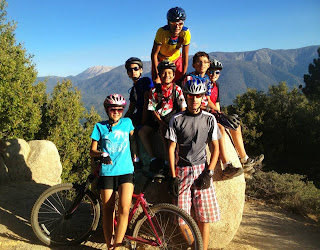 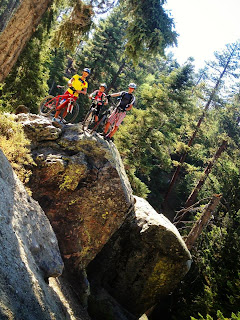 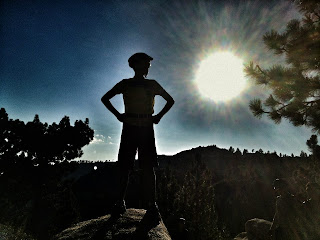 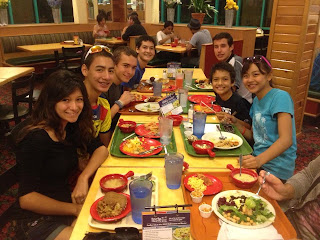 Aug. 20, 2013: Aug. 20 was a full moon and a group of us decided to take advantage of it and go for a mtn bike ride by the light of the full moon! Had about 30 people--almost half of them kids--who went. We went up Scott's Ridge to Razor Ridge and then down Monkey Puzzle, only needing to turn on our lights a couple of times when it got dark in the ravine of the Monkey Puzzle.

Overall, it was an awesome ride, very different from the day time, and may become a tradition! 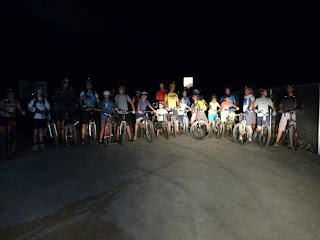 6-5-13: Hey guys, will be riding this Sun. on the bike path at 8:00 AM, so hope to see some of you there! I'm now starting to gear up to train for my first century ride in Oct., so will do my best to make our monthly rides.

Other Sunday Rides
I'm also looking at joining the RWBTC rides on the other Sundays from the coffee place on the corner of Alabama. They usually do about 20-30 miles, and have designated people to stay with everyone so that no one is left behind. Probably a step up from our group since they all do wear lycra, but it sounds like they do have beginners who ride with them and re-group at various spots.

The leader even told me that sometimes, if some are obviously not going to make the whole ride, he will take them on a short-cut back so they aren't left to "die" out there on the ride!

Check out this event and come support it! Hosted by the Healthy Loma Linda Biking/Walking Working Group.

Meeting at Hulda Crooks Main Parking lot at 4:00 pm for a leisurely bike ride through town to Loma Linda University to hear the San Bernardino Symphony perform on campus. Music starts at 5:00 pm and goes to 6:45 pm. Food will be for sale at the performance. All levels of riders welcome! Hosted by the Healthy Loma Linda Biking/Walking Working Group.


Will have to take a rain check for me, personally. Will be at Universal Studios with my nephew where we will be celebrating our b-day that day (a tradition we started) So I don't think we'll be back in time so will catch the next event!
Posted by Dr. Ernie "PA Evangelist" Medina, Jr. at 9:38 PM No comments:

A new chapter for TCF!!!

3-13-13: Tonight, during the board meeting of the Inland Empire Bicycle Alliance (IEBA), they voted to bring in Team CycleFit (TCF) as a fitness program under their non-profit status! After 15+ years of being a very informal, unprotected club, a new chapter has begun for TCF.

On the surface, it might seem that nothing will have changed much, at least for now. But here are some of the benefits to TCF being under the auspices of a non-profit org like IEBA:

BENEFITS
+Insurance coverage on TCF/IEBA rides. Fortunately, we've never had a problem, but as we grow and venture out to different ride location and events, all TCF/IEBA members will be fully covered!

+Discounts on IEBA events and at purchases at IEBA business partners.

+More internal and logistic support from IEBA officers and members. Hopefully this means more scheduled rides and ride leaders and it doesn't have to depend on just me and my schedule.

+Opportunities to participate in other bicycling-related events such as Redlands Bicycle BBQ, safety and skills programs, Safe Routes to School, etc.

+Being part of a 501-3(c) non-profit, we will be able to receive tax-deductible donations and actually have a budget for various expenses (instead of depending on the Bank of Medina! :-)


IEBA's MISSION
Part of IEBA's mission statement says, "The Inland Empire Biking Alliance was formed to unify the cycling community to have a stronger voice in promoting bicycling for transportation and recreation.  The IEBA works to make cycling safe, easier and most of all, FUN for the whole family." TCF was started to help beginners, newbies, anyone get started in the wonderful world of bicycling, so it's a perfect and symbiotic fit.

I'm not going anywhere...
Finally, while I'll still be very much involved with TCF in promoting, evangelizing and recruiting new bicyclists (especially kids), this relationship will allow TCF to grow and help more people get into bicycling.

JOIN IEBA as a MEMBER!!!
Whether you've been riding with TCF since the very beginning, or whether you have just joined us via Facebook or MeetUp.com, I encourage to formally join IEBA as a member (the least expensive category is only $15/year!) so you can enjoy the benefits listed above. To learn more about the IEBA, click HERE to go to their website. (Of course, group rides are open to ANYONE, whether they are an IEBA member or not. All are welcome to ride with us still! It's just that IF something were to happen while on an organized TCF ride, *only* members would be fully covered. Non-members would be on their own liability and insurance-wise.)

Special thanks to IEBA Executive Director, Mark Friis, for making this all possible!
Posted by Dr. Ernie "PA Evangelist" Medina, Jr. at 9:57 PM No comments:

Looking for a "new" bike?

2-21-13: Often, when new cyclists come and join us on a ride, they realize that their bike from their glory days has passed. I had one lady actually crash right in front of me, her bike was so old! (Fortunately, she was ok...and is now riding a new hybrid bicycle, thanks to CycleryUSA in Redlands).

If you're looking for a "new" bike, here are several options:

1. Search online like Craig's list, ebay, etc. Challenge: You can get great deals, but you have to know what you're doing.

2. Go to CylceryUSA, speak to the GM Jon, and mention TeamCycleFit, which will get you a nice discount. We've had a number of our riders do that. They also donated some helmets to us in case someone showed up without one so I have loaner helmets.

3. If you're looking for a "certified pre-owned" bicycle but you don't have the time or the skills to search for one on Craig's list yourself, the best place to go is the BicycleBBQ, with is run by the Inland Empire Bicycle Alliance.

Hopefully, one of these sources will get you on a new (or new to you!) bicycle so that you can have a safe, fun, time riding with us!
Posted by Dr. Ernie "PA Evangelist" Medina, Jr. at 7:29 AM No comments:

Here are some important info that you might want to know:

MeetUp.com
Join our TeamCycleFit group in MeetUp.com! An active way to schedule rides and notify everyone. Free to join, then search for our group and join! All rides, and new rides are introduced here. RSVP so you can see who is going on the rides.
Support store: Cyclery USA (http://cycleryusa.com/)

Other rides:
Check on Meetup.com for other rides created and posted by TeamCycleFit members.

We also encourage our rides to join Team Possabilities rides on the last Sun. of each month, 8:00 AM. For more info or the schedule, go to: http://www.teampossabilities.org/hand-cycling/

Due to certain holidays that fall on a Sunday, this schedule may change. Check here or e-mail to confirm ride.

Days: Most Sundays and weekday AMs. On Tues. have a special kid’s/homeschooler rides at 7:30 AM.

Where meet: lower parking lot of park; I like parking next to tennis courts, but you can park at trailhead of path or next to dog park.

Type of ride: Various trails, usual beginner trail is a 2.3 mile ride which is 99% fire roads, rolling flats to one long uphill, then a blast downhill to the parking lot.

Updates: If you want to confirm a ride is happening, feel free to call or text me to my cell (909-747-5935). I'll also send out a tweet, so follow @TeamCycleFit on Twitter.
IEBA: Team Cyclefit is a program under the Inland Empire Biking Alliance (IEBA). While *anyone* can ride on our organized rides, members of IEBA will be covered by insurance, should anything happen to them while on an organized ride.
Riders who choose not to be a member of IEBA rides at their own risk and responsibility. Please ride safely!
Membership to IEBA is strongly encouraged. For more information on IEBA membership, go to: http://iebikingalliance.org/.

Dr. Ernie "PA Evangelist" Medina, Jr.
Ernie is known by many names--Exergaming Evanglist, Exergaming Interventionist, and Physical Activity Evangelist. As you can see, much of what he does centers around physical activity and helping to motivate and empower people to be more physically active, whether thru video games, bicycling, hiking, Ultimate Frisbee, races, sports, etc. Check out his other blogs to see the variety of physical activity that he promotes. Feel free to contact me at: PAEvangelist@gmail.com